Chronicle of a man-made disaster that wasn’t foretold

This is the true story of how one hundred and fourteen people lost their lives in a nineteenth-century landslide. I raise that semaphore now, in case anyone should feel that a parable for our times is being foisted on them. For we deal here only with what happened to the village of Elm, in central Switzerland, on September 11th, 1881, the day the mountain came down. 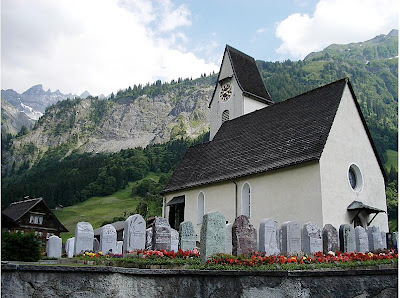 The mountain started to move on a wet Sunday afternoon. Boulders had been tumbling down all day, drawing a small group of onlookers to a nearby inn. In the lower village, most were too busy to watch; they were making coffee, milking cows, and going about their evening tasks. Then, at a quarter past five, a larger rock-mass broke away from the Plattenbergkopf. As it fell, its upper slopes bent and broke, folding a stand of trees into itself. The debris cascaded though a stream and came to a halt within a dozen yards of the inn.

This slide hurt nobody but it did gain the full attention of people in the upper village. They set about preparing to move the sick and the elderly, and a few of their belongings. Some inhabitants of the lower village came up to help and to gawk at the remains of the rockslide. One or two went back to their houses to shut the windows against the dust; nobody was in much of a hurry.

Seventeen minutes after the first collapse, another mass of rock detached, this time from the western side of the cliff. “My God, here comes the whole thing down!” shouted one of the spectators. People started to run. Then the hurtling rocks were upon them. A man called Oswald Kubli saw his brother struck down by flying wreckage from the inn. Choking and gasping, the survivors ran out of a dark cloud of slate dust towards a small hill. Twenty people didn’t make it.

Meinrad Rhyner, a cheesemaker, had a head start. A few minutes earlier, he’d refused to join the onlookers at the inn when they waved him over: he wasn’t afraid for himself, he said, but for the heavy round cheese he was carrying. Twenty paces behind, Heinrich Elmer was staggering along under a load of boxes when flying rocks struck him down. Now Rhyner ran past an elderly man and woman who were helping along their eighty year-old brother. An instant later, the three old people were engulfed.

After the second fall, everyone seemed to be running around. In this moment of respite, a feeling grew that the worst might be over. The animals weren’t deceived. Far down the valley, a cow bellowed and started running for the hillside, “tail outstraightened”. Cats and chickens skittered or fluttered to safety, and two goats “sought and found salvation” on the steps of the parsonage. (The quoted words are those of Martin Conway, a noted alpinist and aesthete, who wrote up the disaster some decades later.) 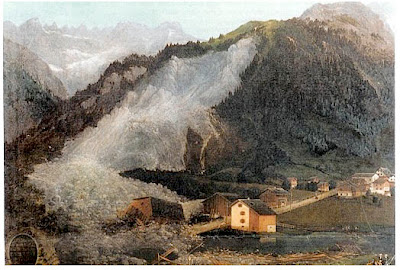 Four minutes later, the entire buttress – ten million cubic metres of solid rock – started to move, the forest on its crest bending like a field of corn in the wind. The trees seemed to flock together, like sheep, before the plummeting mass swallowed them up. When the falling cliff reached the mountain’s foot, its upper part pitched momentously forward, launching across the meadows a tidal wave of shattering rock.

Houses folded in the blast pressure even before the main avalanche reached them. Freakishly, this hurricane-like wind spared or saved a few lives. Among them were the son, daughter and grandchildren of one Huntsman Elmer. This is his tale:

“My son Peter was in Müsli (nearly a mile from the mountain) with his wife and child. He sought to escape with them by running. On coming to a wall, he took the child from his wife and leaped over. Turning round, he saw the woman reach out her hand to another child. At that moment, the wind lifted him and he was borne up the hillside. My married daughter, also in Müsli, fled with two children. She held the younger in her arms and led the other. This one was snatched away from her, but she found herself, not knowing how, some distance up the hillside, lying on the ground face downwards, with the baby beneath her, both uninjured.”

Indeed, few of the survivors were injured. Or, to put that another way, nobody could live who found themselves in the path of the tumbling boulders. When the roiling cloud of shale dust cleared, the rocks had covered a mile-long swathe of valley floor to a depth of ten or twenty yards. The lower village had vanished, leaving on the surface of the debris flow only shattered beams and a few severed limbs. 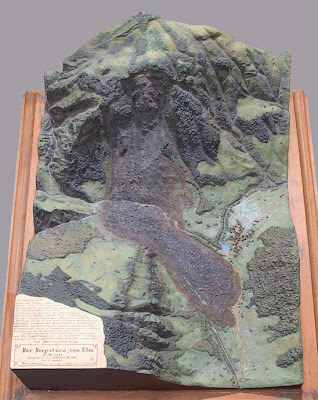 Some time later, a scholarly figure with a patriarchal beard arrived in Elm. This was Albert Heim, Switzerland’s most eminent geologist, whose task it was to compile the official report on the disaster. Nobody needed Heim to explain the landslide's cause, of course. That was obvious: a municipal slate mine had undermined the mountain’s foot, and this on a recklessly broad front. Rather, the question was whether the mountain’s collapse could have been predicted and avoided.

In a way, it was ironic that such a disaster should have overtaken Elm. The village had come late to mining. Good-quality slate crops out all along the valley, the relict of a former ocean trench, and the nearby hamlets of Matt and Engi had exploited it for years. Yet the Elmers had long stayed aloof from this dirty and dangerous business. In their sunny coign of meadows at the valley’s head, they were content to make a living by raising cattle and making cheese, as their forebears had.

Entering the 1860s, the Elmers must have noticed how well their mining neighbours were doing. All over Europe, growing cohorts of children were scribbling their ABCs onto tablets of Swiss slate; business was booming. In 1868, the village council changed its mind: two concessions were granted and miners immediately started to dig their way into the mountain that loomed above. Blasting charges were set off several times a day to loosen the rock before the workers could prise and shovel it away.

To support the weight of the mountain overhead, bulky pillars of rock were left between the various excavations. So, when cracks started to appear in the mountain meadow a thousand feet above the workings, people were mystified. Nobody made the connection with the mining activity below. Anyway, the village councillors had other matters on their minds – they feared that the concession-holders were paying them too little for the privilege of carting away their slate.

Thus, in 1879, when the concessions came up for renewal, the village council decided to take over the mine for itself. Unfortunately, the best slate had already been worked out. To get at what was left, the village miners now started to chip and blast away at the pillars and walls that the concession-holders had left in place to hold up the roof. Before long, they’d gouged out a cave twenty yards deep into the mountain with a rocky overhang that ran for almost two hundred yards – completely without support.

Events now started to accelerate. The cracks in the alpine meadow widened, and parts of the mine roof collapsed in several places. In the spring of 1881, a stream that had previously tumbled down the cliff now suddenly disappeared into the mountain’s depths. By August, the biggest crack on the alpine meadow had widened to three yards in places, and the ground on its downhill side had sagged three or four yards.

On September 7th, large blocks of stone broke away from the cliff, prompting the village council to send a delegation to take a closer look. More boulders came down the next day. The village council put a temporary ban on mining activity and decided to call for expert advice.

On Saturday, September 10th, the cantonal forester from Glarus, the district forester and a mountain guide came up to Elm. Together with two councillors from the village, they climbed to the steep wood on the slopes above the mine. The way was difficult: trees had keeled over like spillikins, blocking the path.

As a first measure, the little assembly decided, the fallen trees would be cleared. This would save the timber from going to waste and it would relieve the burden on the cliff-edge. The experts also suggested that the mine should be closed by early the following year.

This proposal went down badly with the council chairman. What would happen to the hundred or so workers who made their living from the quarry, he objected. The councillors decided to put off further discussions until the following Monday. By then, of course, it was too late. It was during the morning mass of Sunday, September 11th that the rocks started to fall again...

In his official report, Albert Heim raised the question that, to this day, has found no answer: “What more warning," he asked, "did they need?”

Martin Conway, The Alps from End to End